You are here: Home

EMAS and Thermo Fisher Scientific are proud to announce the new Bastin PhD Thesis Award to promote and reward the interest in microbeam analysis and related techniques by young people in the early stages of a scientific or technical career. This award, created officially in 2019, replaces the EMAS Thesis Award.

This award is named after Giel (Guillaume) F. Bastin (1944 - 2015) to honour his tremendous work on developing quantitative capabilities of ultra-light elements on electron microprobes, and for being one of the founding fathers of the European Microbeam Analysis Society (EMAS), which he presided from 2001 to 2005. An obituary published in the EMAS News 78 (March 2015) is reproduced below. The Bastin Fund used for this award is financially supported by Thermo Fisher Scientific, yet the scientific works are exclusively and independently evaluated by an ad-hoc committee from the EMAS board and the co opted members.

The Bastin PhD Thesis award is given every two years to an author of a PhD-thesis in the field of electron microscopy related microanalysis, specifically EDS, WDS, EBSD and CL. Submissions are receivable until 2 years after graduation. Because the exceptional circumstances relating to Covid-19, applications for the 1st Bastin PhD Thesis Award are currently receivable by the submission deadline of February 15th, 2023 for PhD-degrees awarded after January 1st, 2019.

The winning applicant will receive three years complimentary EMAS regular membership and a € 2,000 cash prize. Moreover, the Bastin Fund will cover all reasonable travel, hotel, and workshop registration costs of the award winner, up to an amount of about € 1,000, for attending the next EMAS European Workshop where he/she should give a 15-minute oral presentation in the Young Scientists’ Session.

To qualify for the award, the candidate must provide EMAS with the following:

Giel Bastin was born in Heerlen, a city in the southeast part of the Netherlands, in 1944. After secondary school he moved to Eindhoven to study Physical Chemistry at the Eindhoven University of Technology (TUe). Apparently, Giel and the TUe were a good match, as he remained at the TUe for his PhD, and after that continued working in a staff position for the rest of his working life.

His prime research field was solid state chemistry: the investigation of diffusion behaviour of solids and research in and discovery of binary and ternary phase diagrams. In this period he first became acquainted with the electron probe microanalyser (EPMA). Starting off as regular user, Giel became more and more interested in the exact quantification procedures used in EPMA. This was triggered by the needs of the research in his department, where the focus shifted towards technical ceramics, which generally include ultra-light elements, and the availability of new synthetic diffracting crystals for his EPMA, allowing the accurate detection of these ultra-light elements.

When he realised that classic quantification procedures were unable to cope with X rays from the ultra-light elements, he embarked on a mission to develop his own quantification procedures. But then he faced the task of verifying the general applicability of his models, and worked on his prime opus: to build a huge database with as many EPMA measurements of as many elements as possible and a wide range of measuring condition to allow a rigorous test of any quantification model. In this task he received tremendous support from Hans Heijligers, his stoic EPMA operator, who would spend many months and years acquiring the EPMA data under Giel’s supervision. Based on all these measurements, Giel published several versions of his quantification model, which he named PROZA, and these were indeed a widely acclaimed improvement over other available EPMA quantification routines.

When Giel realised that the quantification models were now actually more accurate than the EPMA measurements themselves, Giel moved on to extend his models to thin-film and multilayer analysis. And in the process of developing these routines he kept fine-tuning the standard EPMA quantification routines. As a result, the scientific community knows Giel Bastin for both his achievements in developing the tools for accurate ultra-light element analysis and for his routines for thin-film analysis.

In his personal life, Giel married his first wife Jannie Koster at the age of 21 when he was still a PhD student. A very happy marriage, blessed with 2 sons and 1 daughter, which ended abruptly 23 years later when Jannie developed a fatal illness. Several years later he was fortunate to find new happiness with Marita Langeslag, with whom he moved back to his birthplace, Heerlen, after his retirement from the TUe.

Hiss loss is particularly hard felt by EMAS being one of the founding fathers of the Society: Having attended the American MAS meetings, he saw great benefits in developing a similar society on this side of the Atlantic. In 2001 he agreed to take on the role of President of the Society, a post he held for the next 4 years. In recognition of his contributions to the Society he was elected an Honorary Member in 2005 at the EMAS Workshop in Florence.

Those who knew Giel personally will forever remember his calm and deliberate nature, and his critical approach to all and everything. For example, if measurement results were too close to the predicted values, he would send the scientist back to repeat the measurements. While working with Giel was quite a blessing, traveling with Giel was often a nightmare. When traveling from his holiday address in France to an EMSA meeting in the USA, he ended up with 48 hours delay because of technical problems with the aircraft in France, and bad weather in the USA. Consequently, he did not attend the award ceremony, at which he was to receive the prestigious Birks Award from MAS. There was another occasion on a flight from Luton (UK) back to the Netherlands, where the pilot announced halfway over the North Sea that the flight would have to turn back to Luton as they had forgotten to load all the passengers’ luggage.

In August 2014 Giel Bastin was diagnosed with pancreatic cancer; a killer disease that is generally lethal as it tends to spread before it can be diagnosed. Giel is survived by his second wife, three children and eight grandchildren. His funeral took place on Saturday 31 January 2015, a solemn event that was well attended, including a good delegation of friends from his long TUe period.

Looking back at his life, Giel never considered the quantification procedures that he had developed his main legacy to the scientific community. According to Giel, models and equations are transient things, which inevitably sooner or later become obsolete when better models are developed. But his huge database of very accurate measurements will always resist the teeth of time, and will be of great value to the microanalysis community for eternity.

The microanalysis community in general and EMAS in particular has lost a great scientist, mentor and friend. 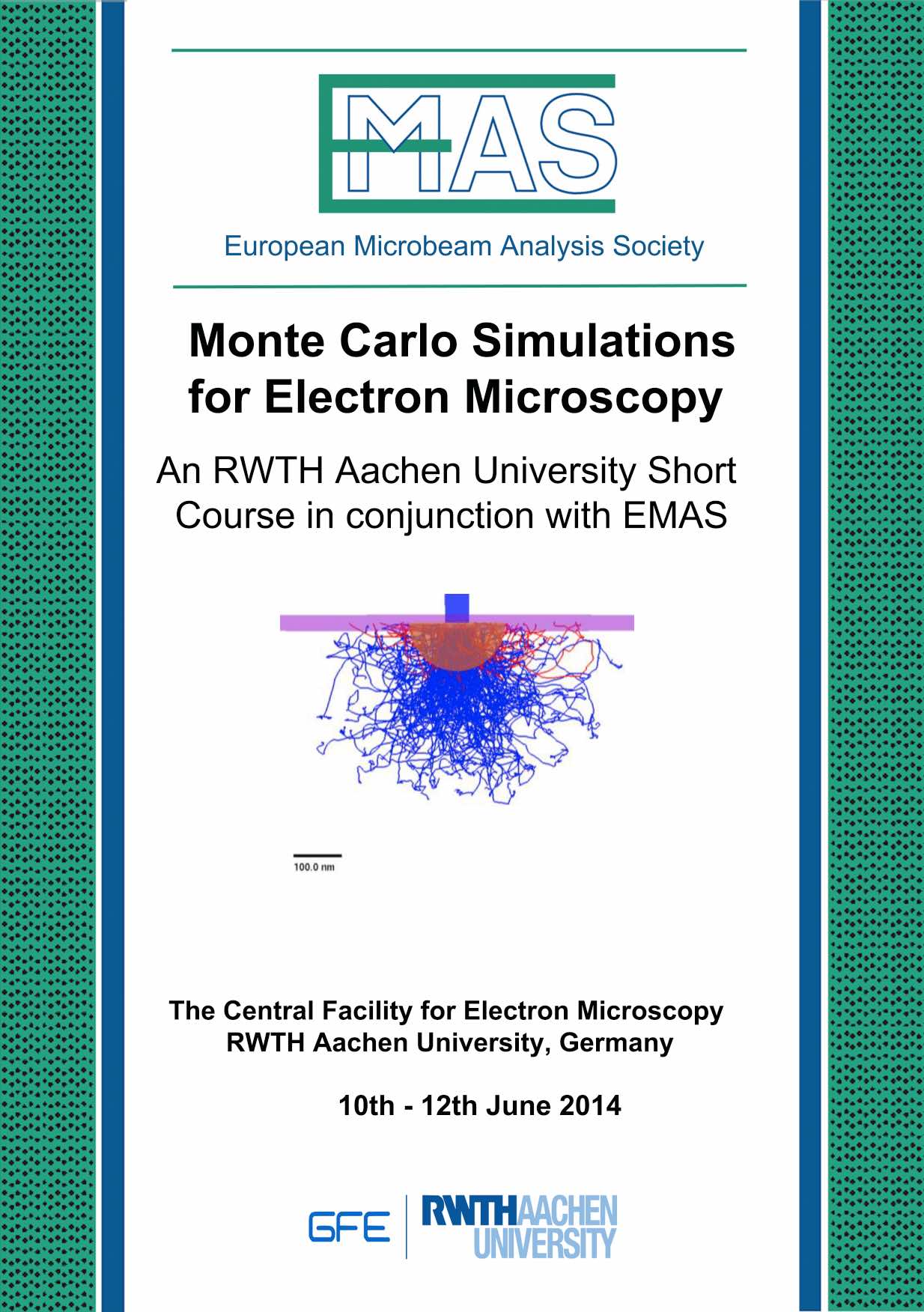 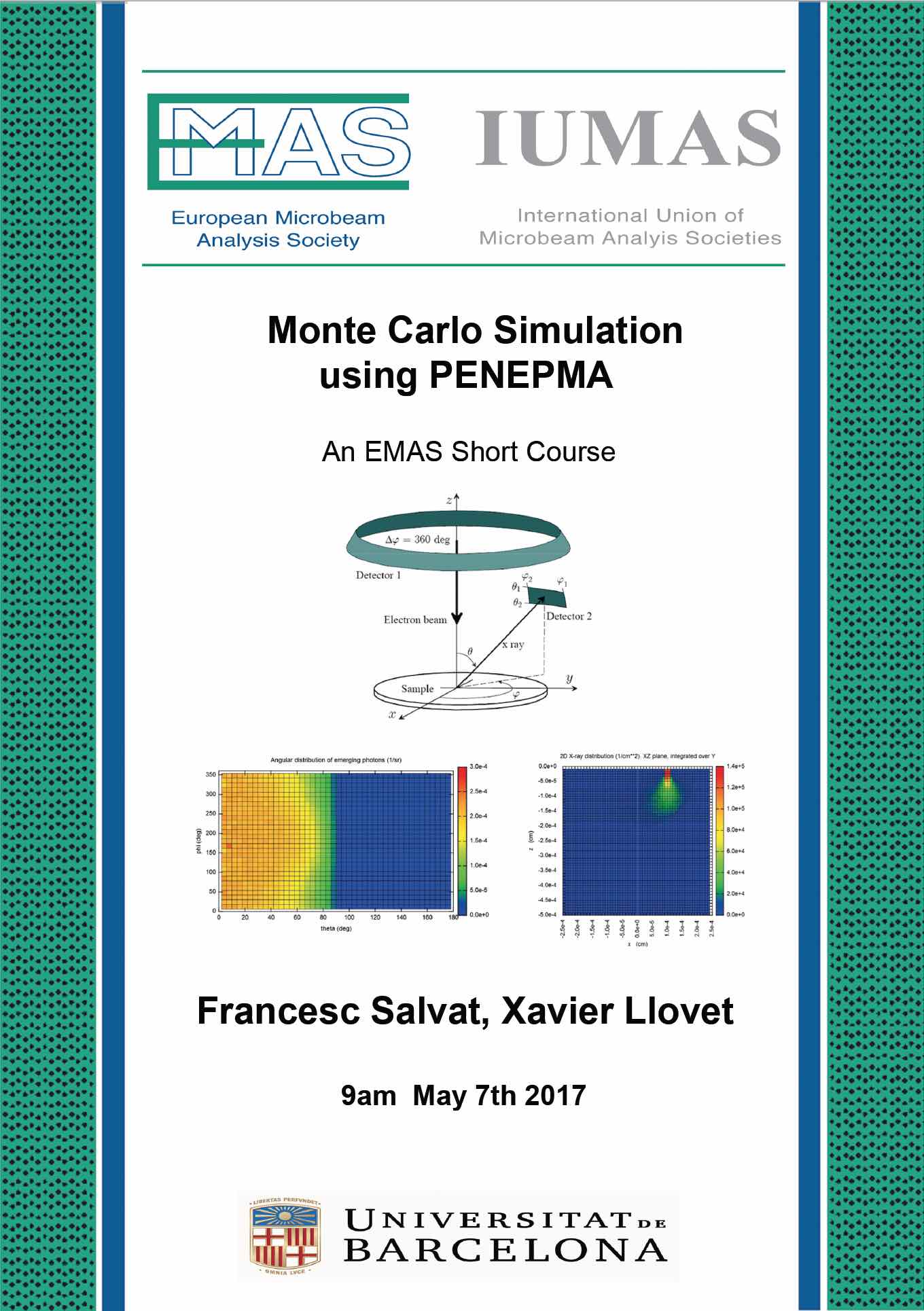 Monte Carlo simulation using PENEPMA
The programme PENEPMA aims at facilitating the application of the Monte Carlo method to the simulation of X-ray spectra obtained in EPMA measurements. PENEPMA is well suited for the simulation of X-rays emitted from samples with complex geometries and/or under unconventional conditions; it can help to understand the limits of the technique and/or optimize the instrument parameters. PENEPMA is based on the use of the general-purpose simulation package PENELOPE. This ½-day short course is intended to provide practical instruction on the use of PENEPMA. The course will introduce new users to the capabilities of the code and acquaint experienced users with new features. The course will be completely hands-on, and examples and applications will be used so that participants become familiar with the way the programme works and the outputs it produces. Participants are expected to bring their own laptop; they will be provided with a Windows or Linux executable version of the programme. 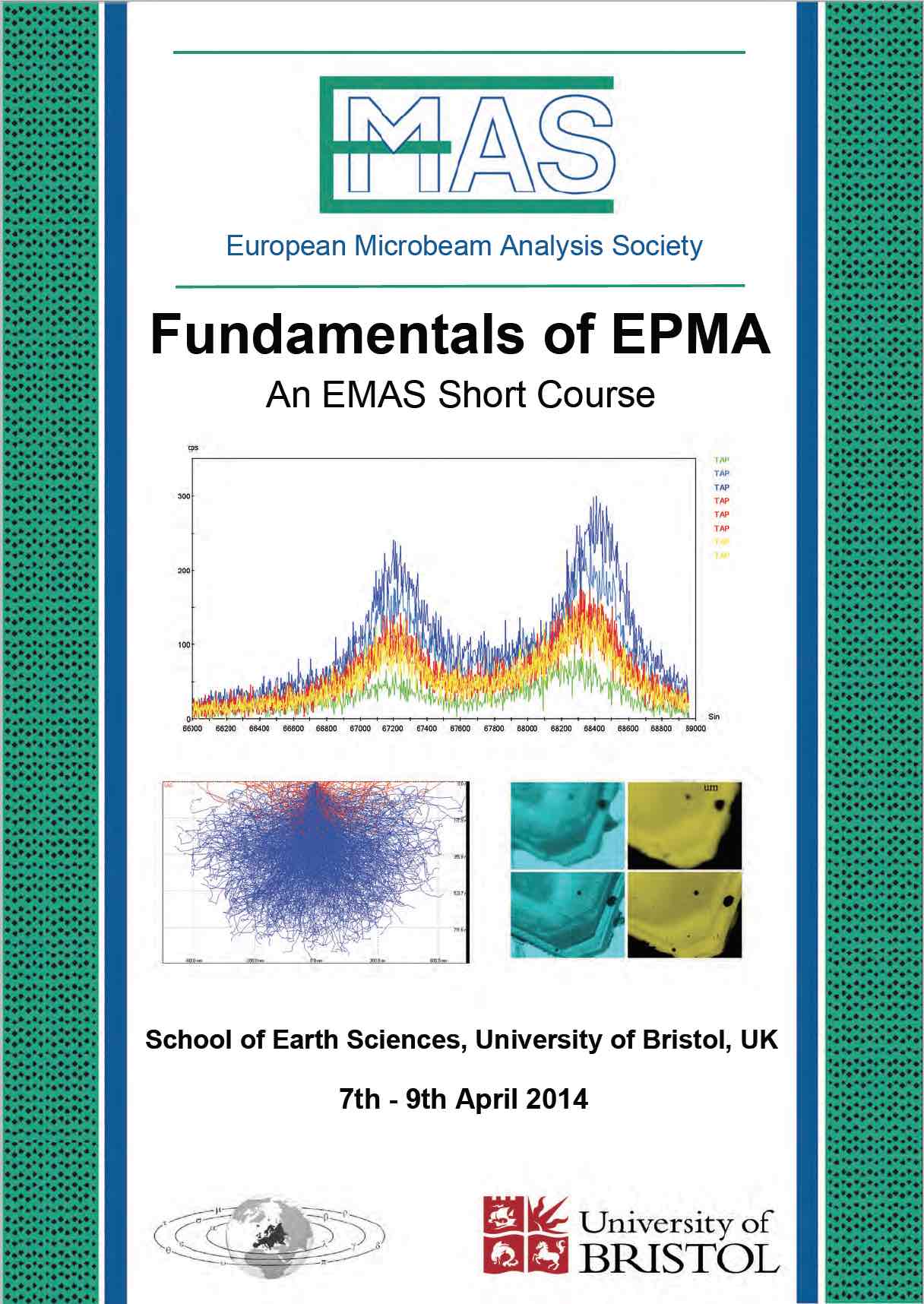 Hosted by School of Earth Sciences, University of Bristol, 2014 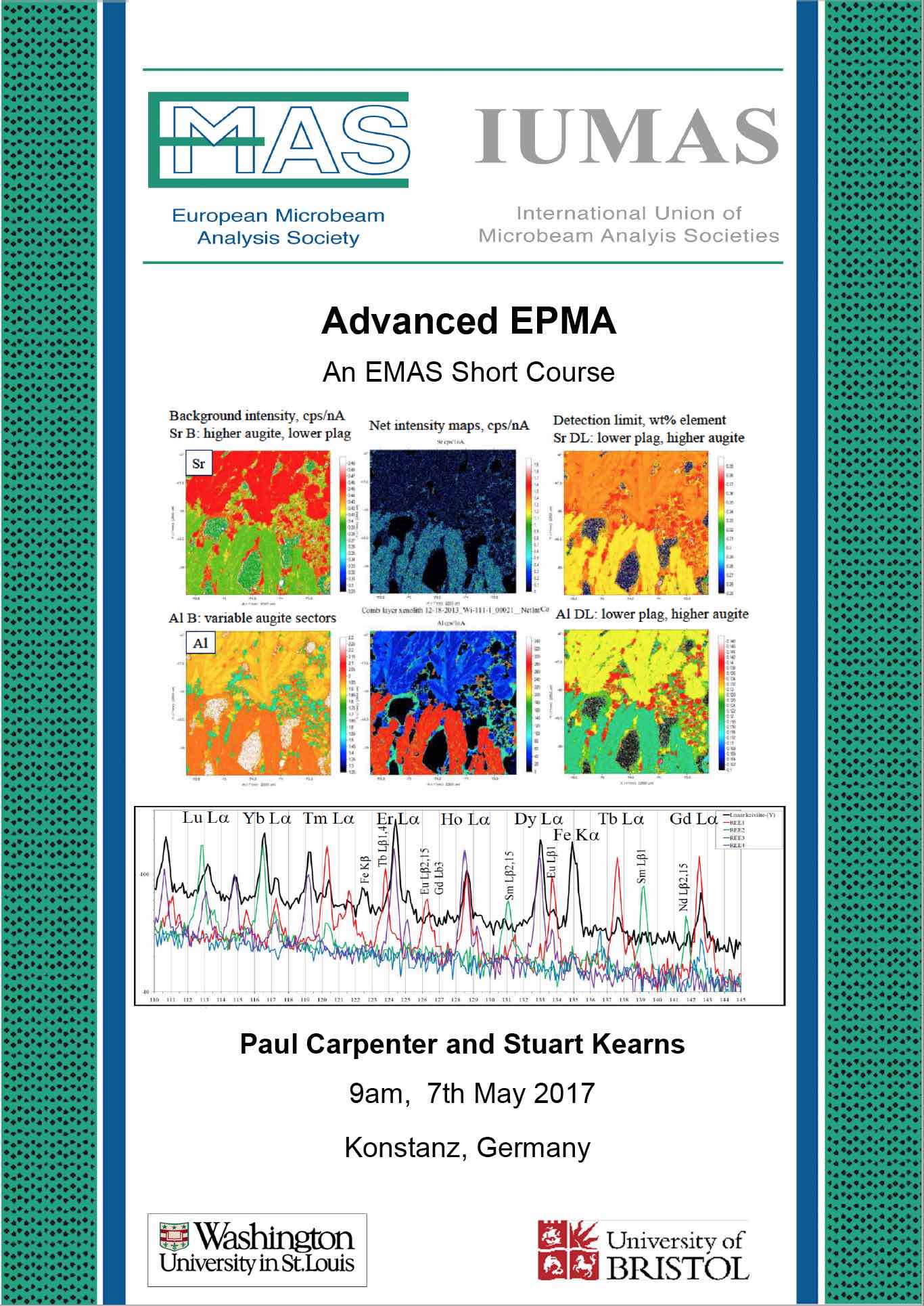 Advanced EPMA
The aim of this ½-day short course is explore some of the more esoteric applications and limits of the EPMA technique. Attendees should be familiar with the routine use and theory of EPMA. The course will open with a review of quantitative analysis by WDS including aspects of instrumental set-up and calibration. Tutorials on low voltage microanalysis, light element investigation and trace element analysis are then complimented by a look at some of the freely available software tools available that can enhance our understanding of analytical protocols. There will be opportunity for attendees to lead group discussions.

Official Journal of EMAS
EMAS has adopted Microscopy and Microanalysis (MiMi) as the official journal of the Society in partnership with the Microanalysis Society of America (MAS).
http://journals.cambridge.org/jid_MAM